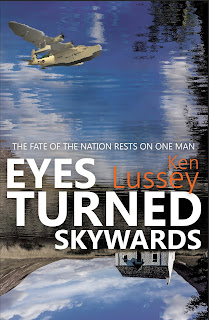 New novel by Ken Lussey, focuses on rumours surrounding a number of real-life events including the death of the Duke of Kent in the summer of 1942 during the Second World War.


Wing Commander Robert (Bob) Sutherland used to be a detective before the War began, he thought those days were behind him, he was wrong.

On 25th August 1942, the Duke of Kent, brother to King George VI is killed in Northern Scotland in an unexplained air crash. A second crash soon after suggests sinister details may be afoot. Sutherland is tasked with visiting the base in Oban and the first crash site in Caithness to gather clues and rule out the threat of sabotage.

Reflecting on a country that is not as united as Winston Churchill nor history would have us believe, and with the kingdom recovering from the bombardment of the blitz, we follow Bob as he unravels lies and deceit from corners of the nation he did not expect.

There is a lovely economy to the writing of Lussey in the growth of Sutherland as a character and how the narrative progresses as he attempts to uncover the truth of the Duke's crash.  Lussey weaves a winning formula of transplanting a detective storyline into the wartime narrative, Sutherland is smart enough to be one step ahead of people and yet stay cool under pressure of which there is many.

Lussey writes with a real efficiency and the dialogue is indicative of putting fictional stories into a historical narrative; a lot of dialogue is exposition so we learn about various medals awarded to Sutherland and the different type of aircraft but it serves as important in the grander scheme of things.

Sutherland has an everyman quality that resonates throughout the book and makes you want to know what is going to happen to him during the remainder of the war time years as well as beyond once he returns to Edinburgh - the possibility of stories from Sutherland's pre-war days in the police force is both enticing.

As an introduction to a new charming character, Eyes Turned Skywards is enlightening and full of enterprise both gripping in its thriller form and wartime context.