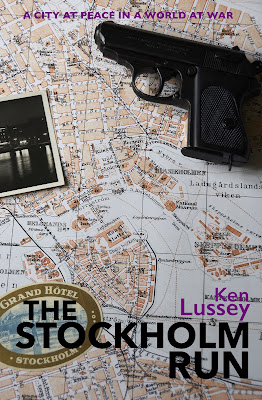 Prolific Ken Lussey has been busy with his series involving MI-11 Captain Bob Sutherland in three books to date, all of which I have had the pleasure of reviewing for this blog.

Capt. Sutherland returns again with his inspirational partner Monique Dubois and this time as with any burgeoning franchise, the character has outgrown his native land and its now time to see the world. With the war still blazing in mainland Europe, Bob and Monique are asked to do a covert operation posing as a married couple and head for Stockholm, where they must take delivery of a message from the Abwehr (a group fighting against the Nazis within Germany). However, nothing runs smoothly during wartime and Monique ends up being taken away leaving Bob alone in a city with little or nobody to trust. Working in the secret business you have to keep your wits about you.

Lussey as always writes with a real clarity and conciseness, his style is matter of fact but he is helped by a keen eye for period detail painting a wonderful picture of war-torn Stockholm due to his intense research; Lussey loves writing about new places from the architecture, to the fashion of the time. He takes care to share the opulence in the Grand Hotel so it shines forth from the page.

Sutherland remains a character of great integrity and humility; he is overcoming his own shortfalls in both his relationship with Monique and his character as an officer, Monique questions whether Bob has the strength to shoot somebody if need be.

Written with a pleasing dependability a returning series provides, The Stockholm Run is a must for fans of World War 2 history and lore. A faithful imagining of fictional work set amidst history changing before their eyes.

The Stockholm Run is out on all formats from Arachnid Press now.

My thanks to the author for sharing with me his work and the opportunity to review.