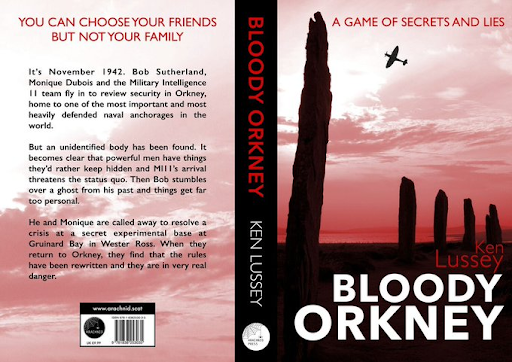 Ken Lussey is an author based in Scotland, and he has come to prominence in recent years by writing an entertaining series of novels helmed by the charming protagonist Bob Sutherland, an Air Force captain who becomes a member of Military Intelligence 11 (MI-11), think of it as a forerunner for that guy with a licence to kill.

Sutherland with his partner, in more ways than one, Monique Dubois, investigate nefarious going-ons amongst bases up and down the Scottish Highlands.

An unidentified body has been found, and people are staying quiet about how the body got there and why. Sutherland and Dubois travel to Orkney one of the most heavily defended anchorages in the world especially during 1942 at the height of the second global conflict.

Men are in danger and the safety of the homeland could be compromised, it is down to Bob and Monique to solve the case as quickly as possible before more lives are at risk.

With these military espionage thrillers, there is always a certain amount of exposition with context having to be explained due to the situation the world and the characters find themselves in and when reading you have to allow the auther some leeway in this regard, and for the first third of this novel this reader struggled to maintain concentration and flow, however, by the second half of the novel Lussey is able to create another rip-roaring page-turner that is exhilarating and memorable - an author like perhaps Fleming, not afraid to put his hero in jeopardy and make the reader wonder if it may happen.

The climatic shootout amidst a church layout is brilliantly handled and he gives scope for more action to come from the intrepid duo with three years left of the war, this course is most certainly not run yet.

This reader for one cannot wait for more from Bob Sutherland via the pen of Ken Lussey.

Bloody Orkney is out now from Arachnid Press