The Dardennes brothers (The Kid With a Bike, L'Enfant) are back with their new film The Unknown Girl out on DVD from Curzon Artificial Eye on Monday 6th February.

The film tells the story about a young female doctor, Jenny Davin (Adele Haenel) in small town Liege, Belgium; who after a long day refuses to open the door to her clinic when already an hour after closing. The next morning policemen tell her that the young woman - a black African immigrant working as a prostitute.

This starts a moral guilt in our young female protagonist, a conflicting individual who is almost bullying to her young trainee doctor. The trainee is a male and she admits she did not open the door to the girl to instill a means of superiority.

She begins an investigation to find out the identity of the young girl who has been buried without a name so here family can be informed.

The Dardennes are famous for small town stories with universal themes, here are tropes of privacy, guilt and belonging. Jenny is unusual in the sense that we do not know her history, where has she come from; we are aware of her future more with the impending clinic she may well take control of. The story makes her reassess her decisions and she does alter from lacking bedside manner to becoming a better local GP by using her local knowledge to her advantage.

Shot with gripping hand held flourish in the same vein as classic neo-realism and the better Ken Loach films, bringing a sense of documentary realism to a fictional story.

It also has a political message on immigration within EU borders in today's current political climate providing a compelling platform for this intelligent film with a brave central performance from Haenel.

The Unknown Girl is out on DVD from Monday 6th February from Curzon Artificial Eye
Posted by NextToTheAisle at 01:16 No comments:

Occasionally you get nervous of seeing a film, you get apprehensive that a film that has been universally lauded and hailed will not meet the expectations you place upon it. You also fear you might miss the boat and not appreciate it when seeing it some weeks after release.  These fears amount in this day and age when flavours and trends alter quicker over time. Long gone are the days when films can take residence in a cinema and grow through word of mouth and maintain a solid box office run such as what was achieved by My Big Fat Greek Wedding, a hit that ran for three months due to word of mouth.

La La Land has been praised since it premiered at Venice last autumn. The follow up film to his Oscar winning Whiplash, Damien Chazelle returns with the film he wrote before that jazz school, drill sergeant movie.

This film is special from the outset when we witness gridlocked Los Angeles traffic being forgotten about when travellers start singing and dancing ending in a huge choreographed number on car bonnets to the tune 'Another Day of Sun' fitting for the setting of L.A. and the general disposition this film wants to shine forth.

We then meet our intrepid duo, Mia (Emma Stone) a young actress who dreams of making the big times but is struggling whilst locked in a barista job and insipid auditions. After her, we bump into Sebastian (Ryan Gosling), a jazz pianist who dreams of owning his own jazz club one day. Their paths collide one night when Mia hears Sebastian play at a restaurant over Christmas, he acts badly and then they bump into each other again at a pool party.

That night comes probably the best dance number of the film 'A Lovely Night' which recalls the sophistication of Fred Astaire/Ginger Rogers films of the 1930s and the cheeky inventiveness of Gene Kelly with their scrapping shoe steps on tarmac. It also helps that it is probably the best song of the film to, a number that solidifies the partnership and also keenly makes the audience aware they are watching a musical, and the pair are in a musical.

Some critics have been critical of the singing voices by the lead pair, which is somewhat unnecessary and perhaps people just wanting to find fault, yes their voices are not the strongest but perhaps that helps in the emotional connection with the audience. These two are so in love that they feel like singing and dancing, its a cliche perhaps but this does happen to people when in love, they feel like singing at the top of their lungs or dancing on rooftops.

The film is a good musical yet I feel Chazelle has done a better job in celebrating the classic Golden Age of Hollywood movie-making from mid 1930s to the late 1950s when the Studio system was at its height with the names of MGM, Fox, Universal everywhere; he harks back to the chemistry between leading actors when the spark is there from the start.

Chazelle cleverly does this need of appreciation a by-gone age by having Sebastian be so enamoured with the glory days of jazz music.  His passion for jazz is something is used as a device in a film to make you remember to love classic movies calling upon romance, love and music.  Chazelle name drops Notorious, Casablanca and Rebel Without a Cause and it is the Humphrey Bogart/Ingrid Bergman film that this film closely resonates with.

Casablanca was about two people who knew each other in happier times and by the film's end they are not together, even though their love is so strong, for reasons they cannot be.  In this film by the end, Mia has taken an acting job in Paris and they wait to see what happens, this leads to a five-year skip when she is now the renowned movie actress, happily married and with a two year old daughter, whilst Sebastian has his jazz club with full houses listening to new modern jazz with a younger audience. 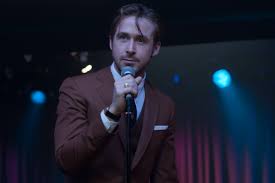 Mia and her husband, drop by on a whim to a club, she sees the sign that she drew for Sebastian adorning the entrance and you feel the anticipation building up in her with the prospect of seeing him again.  Sebastian takes the stage, he sees Mia in the crowd (calling back to a previous song and shots in the movie) and he starts playing 'Epilogue' a composition to rival long narrative pieces from Singin' In The Rain ('Broadway Melody') or An American in Paris and whilst he plays, Mia is shot back to when she first saw Sebastian playing and their first contact is altered when he kisses her instead of brushing past her abruptly.

The abrupt kiss leads to a dream sequence as the couple walk through an alternative five year span with mistakes avoided or rectified, yet they are together.  However, like Casablanca, they remain apart only sharing a look across a crowded room, Sebastian knowing that his persistence for Mia to succeed and attend that vital audition led to him losing her, but loving her forever.

La La Land is the Best Film of the Oscar contenders and if you have not seen it yet, you have to before it is too late, specifically on the silver screen when the vibrancy of colour and the thrill of music pours off the screen.

Posted by NextToTheAisle at 08:05 No comments: