Erik Kirschbaum is a foreign correspondent based in Germany, originally from New York City has worked for Reuters and the Los Angeles Times. Kirschbaum is an American of German heritage working with an American viewpoint overseas, he has written a book about a displaced German in America who is changing the way the nation looks at a very European sport.

Taking on the scope of a blueprint for change of soccer in America, Kirschbaum is part biography of Jurgen Klinsmann, head coach of the United States Mens National Team (USMNT), telling the story of how his determination helped him come from a small town in rural Stuttgart to become one of the best forwards in footballing history and certainly of the last 15 years of the 21st century.

Following his retirement, Klinsmann continued his thirst for knowledge and hunger to succeed into a coaching career starting with the German national team for the home World Cup of 2006, when his influx of attacking ideology and specialist coaching led the hosts to a cruel semi-final defeat versus eventual champions Italy.

Klinsmann then leaves the role for his assistant, Joachim Loew, who taking the foundations he built leads Germany to a World Cup triumph in 2014 in Brazil, the first European team to win the World Cup outside of Continental Europe.  Klinsmann was in Brazil too, as coach of the United States and they exceeded expectations qualifying from the Group of Death with Germany, Portugal and Ghana to get to the knockout phases before a cruel defeat to a reborn Belgium.

The novel makes pains to realise how diligent to learning Klinsmann has been throughout his career.  Having played in Italy (Inter Milan), France (Monaco), England (Tottenham Hotspur) as well as his own country with Stuttgart and Bayern Munich, the striker would always jump into learning the new language during his time away from the training field. Klinsmann is of the belief that a player must be educated off the field as well as given all the benefit of having the best on-field training, if a career is cut short a player should be educated enough.  He makes the point that paying young players too much too early in a career would quell any desire to better their performances or hunger to improve.

Klinsmann seemingly took an American impulse for different coaches for different positions and brought them to the German national team in the run up to 2006, also the employment of a nutritionist and most importantly a sports psychologist to help with the pressure of a home tournament is the difference between margins of victory and defeat.

Since 2006, in other sports, the proliferation of sports psychologists across a whole spectrum of professional sports have been at the forefront of exceptional performances - from the British Cycling dominance from Chris Hoy to Bradley Wiggins to Chris Froome, to the resurrection of Ronnie O'Sullivan and his relationship with Stephen Peters who could take a player with little tournament preparation and win successive World Championships. 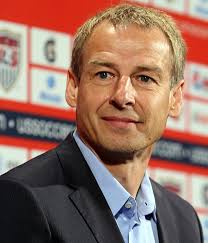 Soccer Without Borders, does waiver from time to time, and does repeat itself too often but it is written with genuine relish and enthusiasm for the subject at hand and the effect the person has had on his sport which is continuing apace in America.

Klinsmann has had a profound effect on world football, his application of a more attacking philosophy for Germany has filtered out into the Bayern Munich infrastructure and established the dominance they enjoy to this day, his German squad of 2006 had an injection of quality youth at his disposal - Philip Lahm, Bastien Schwiensteiger, Thomas Muller - who became World Champions; and he is making great strides to make the United States a mainstay of future major tournaments starting with the Copa America this summer which is being staged in the USA.

The book is part biography, part analysis and is an entertaining foray into unmasking a man who is equally modest and professional about his exploits.

Soccer Without Borders is out now on e-book/kindle from Amazon, but is released by Picador Books in Hardback on 13th July in the UK
Posted by NextToTheAisle at 03:31 No comments:

Posted by NextToTheAisle at 12:00 No comments:

Directed by Sebastian Schipper, Victoria is a gripping look at a night in the life of a young Spanish girl who lives in Berlin, and gets sucked into doing something she would not ordinarily do.

Shot in real time, the film is supposedly shot in one take as the camera follows Victoria (Laia Costa) as she leaves a nightclub at 4am in the morning to go home before work. There she encounters four guys and there is an initial flirtation with Sonne (Sebastian Lau).  He and his friends are German, and Victoria cannot talk German fluently, so in broken English they communicate about life, drink and having fun.

Halfway through the film though, there is a shift in tone as the narrative takes an abrupt turn involving a favour ex-convict Boxer (Franz Rogowski) owes someone from when he served jail time.

The hand-held camera that follows Victoria and the real-time situation creates a fear of impending doom as we follow this vulnerable girl making hasty decisions revealing her naivety because she is alone in a big city abroad.  Until the abrupt turn in the narrative, this viewer feared that Victoria was going to be a victim of sexual assault, but the shift shows how immediate a world we live in.

This is a film for the millenial era - a generation of knee-jerks and instant reaction to feel like you belong to this world.  It is a film of the here and now, and how every decision can change the rest of your life, but also how fleeting moments and meetings with people can have a further longer lasting influence.

Shot with real panache by Director of Photography Sturla Brandth Grovlen (his is the first name credited at the end of the film - and rightly so), whose camera goes where the characters go into lifts and cars; there is never a let down in the tension as the narrative unfolds.


It is a credit that while the film could be marketed as a one-take gimmick film, the cast elevate the film to something more than its selling point and a film that stays with you due to the intense performances and conviction of a director to follow through on the potential of an idea to reach the ceiling and burst through it.