Times can get hard, but we've got to keep a lid on
Don't let our emotions come to the boil
Cos we are a team
Yes we are a team
And we need each other to get through

You are so pretty, you are beautiful
My eyes are beholden to you and you are alone
Yes I like your face
You're pretty beautiful face
And I want to look at it the rest of my days

Tell me tell me what is on your mind
I've got this feeling I want you for all my life
And I'm only getting started
We're just getting started
To show you what you mean to me
Posted by NextToTheAisle at 02:20 No comments:


The new NBC show which is appearing on Channel 4 is one of those shows that comes along once in a while, and it is the sort of feelgood show that a nation in crisis needs.  Offering escapism from the trying nature of day to day life, the series offers a heartwarming glimpse of a life full of homespun notions of goodness and wellbeing.

Starting out with a silly Wikipedia reference, stating that any person shares their birthday with 18 million other people on the planet, we witness four people sharing their birthday. They are all 36, and it seems this is the mid-point crisis level for all three people.


Jack (Milo Ventimiglia) is with his pregnant wife Rebecca (Mandy Moore) who is expecting triplets on his birthday.  When her water breaks they rush to the hospital.  We then switch to Kate (Chrissy Metz), an obese woman who is keen to lose her weight this time in spite of self-help post it notes adorning her fridge, she has a twin brother Kevin (Justin Hartley), an actor at a fork in the road of his career, between being taken seriously as an actor in spite of appearing in lowest common denominator comedy where he frequently takes his top off to show his washboard abdominals.

The fourth person is black man Randall (Sterling K. Brown - who was excellent in The People vs OJ Simpson), a modern day successful professional who has found his biological father by way of a private investigator. Randall is reluctant to make contact with him, as he left him outside a fire station on the day he was born. 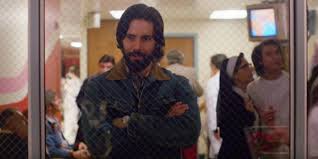 Having seen shows of this sunny disposition before (Thirtysomething, Ally McBeal) falling into the trap of having a good cast without the necessity of a solid script, This Is Us has the admirable quality of having a well written script that helps bring the best out of this well assembled ensemble and vice versa.

The script is clever as well such as when Randall describes his interaction with his father to his wife, as if it is some lame sitcom like 'The Man-ny' which Kevin is appearing in within the show; this willingness to refer to the intertextuality of lives and how similar people may watch the same shows in spite of racial differences is indicative of this unified world the show wants to picture.

The moments Randall confronts his estranged father and Kevin's breakdown on the set of his sitcom are neither histrionic striking the right balance between being heard and making sure they are said in the right way. Even the pediatrician who delivers Jack and Rebecca's triplets gives Jack a pep talk in the hall after the birth; it could be construed as too sweet for a serious moment, but the balance between the light and the delivery by Gerald McRaney is expertly handled.

While moments of saccharine may grate on bah humbugs in this seasonal time of year, those moments are necessary to the plot such as the birth of children or reunions of lost family members. The show does not ask too much of its audience, nevertheless, it leaves you smiling and beaming. 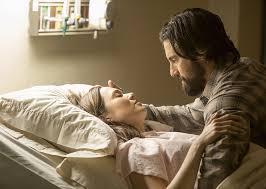 The reveal at the end of the pilot episode of the connection between the four thirty somethings is a real eureka moment of plotting by creator Dan Fogelman, ably assisted by co-directors John Requa and Glenn Ficarra. The twist allows for a more expansive exploration of the characters which will certainly get this viewer returning for more of this show's positivity.

This Is Us screens at 10pm on Channel Four weekly.
Posted by NextToTheAisle at 00:57 No comments:

The College Basketball is in full swing and with most teams close to playing their 10th regular season game after the early season tournaments now ended, conferences are in to the strength of their non-conference schedule.


In this instance, many teams can either decide to fill their card with cup cake victories whilst playing a top 25 side to look good in the eyes of the committee come Selection Sunday. The need for these games is to fulfill a season rota but also learn how your team is playing before the conference schedule comes into full swing.

Some games are built on rivalry in-state, such as the Big 12 West Virginia travelling to the ACC Virginia; both teams will be in the NCAA tournament but a win for either promised a big RPI victory. In this case, it was Bob Huggins' Western Mountaineers who left with the bragging rights and a road win to the resume.


Others can find a defeat can be liberating. Indiana Hoosiers, so often a perennial underachiever with Tom Crean at the helm defeated Kansas Jayhawks on the opening night; then followed a loss on the road at Fort Wayne, Indiana. A crippling loss for the Hoosiers, but should Fort Wayne win the Horizon League or even finish a close 2nd with 25 wins they can be considered for the tournament. And not all defeats are bad, the Hoosiers themselves welcomed North Carolina, who at the time were undefeated and handed them their first loss of the season.

It is this merry-go-round or carousel of chaos that makes the College Basketball season so unpredictable at times. Due to the one and done rule, teams are frequently looking for new schemes and integrating personnel into those schemes  You will not see a team like Florida who won back to back titles under Billy Donovan and had a returning title side of four starters; Kentucky with their frequent revolving door of talent attempt it but even they can end up in the NIT.

Teams that look good thus far are sometime familiar, Kansas Jayhawks (7-1), North Carolina (8-1), title holders Villanova (8-0) proving it was not a fluke and that Jay Wright deserves more props than he receives and UCLA (9-0) who went into the Rupp Arena, Kentucky (7-1) and served up the Wildcats first defeat of the season.

The Bruins 97-92 victory was nothing to do with the Wildcats having an off day, but more to do with the collective talent of UCLA combining in spite of an off day for Lonzo Ball, their heralded guard who himself had an off day.


This victory which elevated the Bruins to #2 in the rankings behind Villanova, is indicative of a trend currently returning to College Basketball. Guard play and balanced scoring - up and down the divisions you can see good guard play making a comeback. From Kansas playing a small rotation with Devonte Graham and Frank Mason, Ball at UCLA to Al Freeman and Manu Lecomte at Baylor (8-0).

The idea of balanced scoring and not being over-reliant on a big forward in the paint means a team is harder to prepare for in opposition, utilises confident shot makers from behind the arc or in mid-range yet it asks for consistency at both ends of the court. Guards by definition are defenders, who hassle attackers forcing turnovers and steals then quickly scoring on the break.

Teams are scoring a lot, the Bruins scored 97 at Kentucky, a team who have scored over 100 points three times already this year. This is due to teams wanting to score more in possession and the growth of the three point shot, a trickle down effect from the success Steph Curry had in college up to the NBA.

There will still be good defending sides who make it difficult for teams to score and eat up their shot clock possession such as Louisville (7-1) and West Virgina (6-1), whose constant press will be hard to face for a full 40 minutes, and Villanova while they may not have the dynamic playmakers that set the NBA draft on fire, the diligence of the system will win them more games than they lose.


Games to watch for this week:
Markelle Fultz's Washington on the road at Gonzaga; Fultz is a top NBA prospect averaging 22.7 ppg, 6.7rpg and 6.6apg yet the team is 4-3 facing a tough road trip at undefeated Gonzaga (8-0) - Wednesday night.
Saturday - Battle of 2 undefeated teams - Villanova travel to Notre Dame (8-0) ranked #23
and a barn burner as Cincinnati (7-1) travel to Butler (8-0)

Keep watching this space for more CBB observation next to the aisle.
Posted by NextToTheAisle at 00:54 No comments: