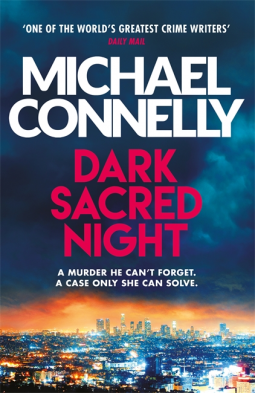 
Set in and around Los Angeles, Bosch is not necessarily the lead protagonist of this novel. He is partnered up with the younger female Renee Ballard, a detective who must navigate the dreaded graveyard shift.

The wonderful plot device that Connelly uses is that we have the dual threat of following both Bosch and Ballard as they go around investigating, and while Bosch can seemingly focus all his efforts on solving the case of Daisy Clayton, a murder case that has not been solved for 10 years.

Ballard is used as a political statement - a younger member of the police force who must navigate all various channels of enquiry as well as the actual beat of hitting the street and resolving disputes.

In the middle part of the book, Ballard investigates the disappearance of an elected official's son; she visits the apartment where he resides, questions the room-mate and then notices a rug has been moved.  It shows that the flat-mate has murdered the missing son, this is great writing and shows the ingenuity and intelligence of Ballard in such matters, in another chapter she attends a strip joint that is worried about someone breaking in and robbing them, this turns out to be youths sneaking a peek at female flesh.

This constant dipping in and out of actual day to day work away from the deeper dive into the Clayton murder case keeps the reader on its toes while appreciating the sincerity of Ballard married with the sheer doggedness of Bosch - a nice union which has perhaps breathed new life into the old sage. A sequel or new book the The Night Fire is out in October of this year


Connelly shares the writing style of contemporaries Child and James Patterson, it is quick and zips along at a clip that allows the book to be devoured in several sittings.  Like James Ellroy who famously writes about Los Angeles and Hollywood, Connelly writes about the city using the vast landscape of the sprawling cityscape to his advantage with a milieu of background characters and cameos breathing life into the story whenever needed. 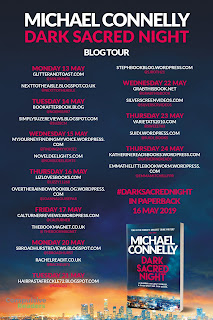 Dark Sacred Night is one of those thrilling books that can be perfect for the beach or the bedroom, a master storyteller at the peak of his powers.

Out from Orion Books in Paperback from 16th May.

My thanks to Tracy Fenton for the review opportunity and being part of the blog tour
Posted by NextToTheAisle at 03:24