Designated Survivor, is one of those shows that makes you slap your hand squarely on your forehead when you hear the premise and wonder why has it never been made into a film or television series before.

On every occasion of the State of the Union speech at the Capitol Building in Washington DC, one member of the then President's cabinet is placed in a secure undisclosed location in case the very worst scenario takes place and all of the remainder of the cabinet are killed.  This individual would then be sworn in and become the new Commander-in-Chief of the United States of America.


In the pilot episode, this worst case scenario takes place as the Capitol Building is blown up by a devestating explosion in an attack far worse than 9/11.  Our protagonist is Tom Kirkman, and is portrayed by Kiefer Sutherland; Kirkman is the Secretary of Housing and Development who on the morning on the speech was about to take an Ambassador role in Canada after being removed from the cabinet.  Kirkman's plans have now changed forever.

After being sworn in swiftly we cut to Kirkman throwing up in a marble bathroom in the White House as the size of the task before him dawns on him. This is the most human part of the pilot which is very by-the-numbers; it states that he is well over his head, he never wanted to be the President, his son is a rebel and the military want him out before he has even begun.


Yet Kirkman knows what is required of him whilst his Chief of Staff Aaron (Adan Canto) tries to input his own ideology on the new man in charge, the same for the head of the military who wants him to command an attack on any Middle Eastern terrorist group so that America can have an enemy to face down.

Three episodes into watching the show on Netflix - which screens episodes weekly - the show is one of the better things I have seen on that service in recent months. It is a show fittingly of the time and portrays some of the best traits of America on to the screen; the ability to rise up from the ashes of a major disaster, the opportunism of individuals to make a difference and the pride of the nation circumvented through one role.  It also shows the worst; the class divide, the distrust of politicians and that glasses do not look good on TV.

Sutherland is a great piece of casting, taking the man who was Jack Bauer in 24 - the renegade who took over post 9/11 and would single handedly take on any terrorist with his bare hands, he was the best of America (brave and patriotic) and the worst of America (torture).  Here he gives Kirkman an air of nobility and decency reminiscent of President Bartlett from the West Wing and the current President Obama, but also a man who knows he is way in over his head but is capable of greater things if he has support. 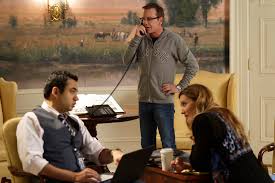 There are some beats that fall flat, the role of Special FBI Agent Hannah Wells (Maggie Q) is a little bit misguided, would an agent really be this selfish and even at work following the disappearance and death of a significant other.  At the moment Hannah's story is one of the threads that is not ringing true at the moment, but as she digs deeper into the explosion at the Capitol perhaps her role will grow and lead to interaction with the President.

One more thought on his name. Kirkman. Is he meant to be Kirk-man, like a nod to Captain Kirk of Star Trek, the head of the Enterprise with a rag tag of people who do not have much faith in him and yet he must show leadership when others are better qualified (Republican survivor Kimble/Spock) and win over support from naysayers (Aaron/Bones) and entrust those vital to the cogs of the machine (Seth/Emily; Scotty and Chekov)

The series is gripping without shouting out from the rooftops saying look at this, it has plot points that are sometimes telegraphed - yes the teenage son would leave his illegal drugs and roll of money in his sock drawer - but it always ends on a genuine surprise that you do not see coming. Can it sustain this over 22 episodes in a full season and seasons to come? This reviewer sure hopes so.